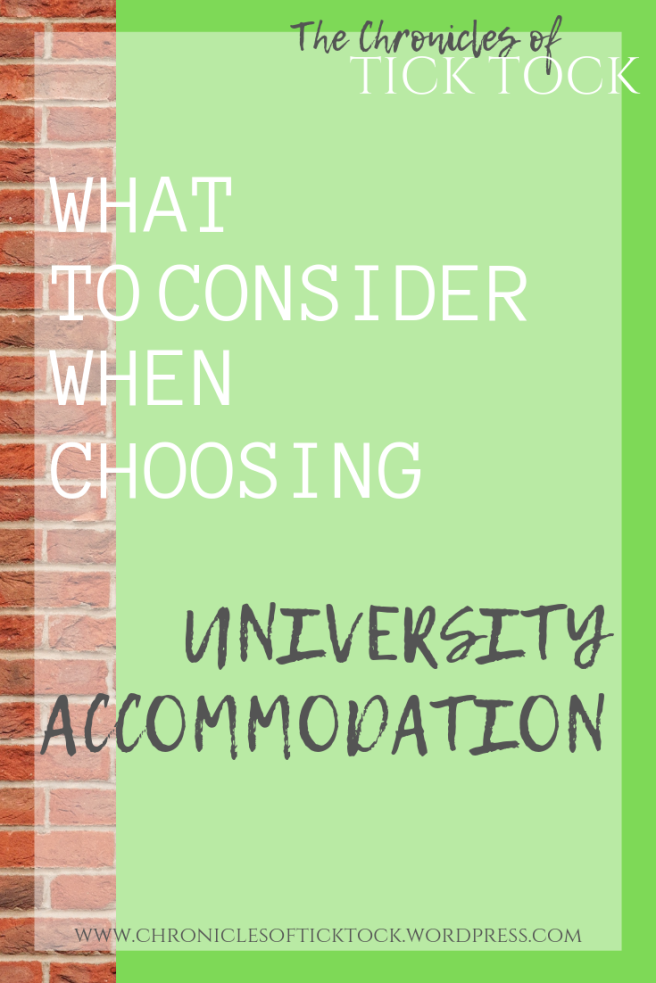 So, as most of you know, I’m currently in my first year at university. This time two years ago (it feels like forever??) I was making plans for uni open days – exciting, right?

Now I’m nearly at the end of my first year, I’ve got a few things that I’ve picked up from both myself and my friends at other unis to bear in mind when you’re having a look around the accommodation.

(This has turned into a pretty long post – hopefully it’s at least somewhat useful!)

This is one thing you’ll probably know straight off the bat; most of my friends were determined to have an en suite because sharing showers with strangers sounds pretty gross. (To be honest, that’s fair. Luckily, my flatmates are lovely people and it stays clean for the most part, though we do have to get it unclogged a fair amount).

Naturally, en suite bathrooms are a fair bit pricier. You do always know that it’s going to be clean, however, and you don’t have to cart your towels backwards and forwards all the time. Chances are you also won’t have a bath mat that gets waterlogged from more than three showers a day. (Yes, we had that. Yes, it squelched.)

Shared bathrooms really aren’t so bad though. They’re significantly cheaper. In my experience, I’ve never had to queue for the shower and I can count on one hand the amount of times I’ve had to wait for the toilet. (That last one is also only because our toilet broke; if you don’t have muppets over for pres, you’ll probably be fine.)

If you want to go down the sharing route, I suggest you check out how many showers there are in a flat, along with how many people – we have three showers between eleven people and it works just fine!

From that last bit, you can probably tell that I’m in a pretty big flat. In our accommodation block, we actually have one of the smaller flats; the floors below us all have 14 people each. The upside of having so many people is that we rarely have drama. (Okay so there was a bit of drama before Christmas because of one guy, but he eventually left.) Because we’re all coming and going, we’re never on top of one another, and I’ve definitely made a lot of friends for life in here.

The downside is that we have one oven and it is tiny. I also can’t see into it because the damn thing’s fixed to the wall above my eye-line. Luckily we’re all on pretty different eating schedules, but it still sucks when you gotta wait half an hour for a shelf.

I’ve got two friends who are in small flats (about four to six people each) and they’ve both had different experiences. One is really, really close with her other three flatmates and they’re all best friends for life. The other has had a more…trying year. Being in such close quarters with so few people turned out to be pretty difficult, and there’s been a fair amount of sniping.

To be fair, most people aren’t too bothered by this. I definitely got a good deal with my room; it’s pretty big for uni accommodation. That being said, my bed is 2ft6 x 6ft. (Sidenote: I just looked at the comparison chart for my uni, and every other type of accommodation has 3ft by 6ft6)

Now, being 5’2, that’s not such an issue for me. In fact, it’s pretty comfy. For my two flatmates who are both well over 6ft tall, however? Not so much. It’s also not so great if you pull and wanna bring someone home, not that I would know.

I…got a decent deal on this one, but it was by pure fluke. My flat has exactly the same amount of storage for eleven people as the flats below us that have fourteen. Each of our flats has fifteen lockers (yah, they aren’t real cupboards), meaning that we get four left over.

Because of this, we all store our plates in one and glasses/mugs in another, leaving more room for food. We struggle a bit more in the fridge and freezer, but that’s sometimes because Slightly has the bright idea of buying two lots of milk or about thirty bread rolls with the intention of freezing them.

Keep an eye out for the amount of room there is, and definitely ask the people living there what it’s like.

For the love of God, check where (most) your classes will be. And do not pick accommodation the opposite side of campus. Just don’t do it.

Also, check out where you’ll be in relation to places like the library, the SU bar (even if you don’t drink, you might wind up going out, and you don’t wanna be trekking for miles to get home) and the campus store. If you like walking, don’t bother about this one. If not…well. Make life easier for yourself 😉

That’s about all for this post!! If you’ve found it at all useful, give us a shout!

4 thoughts on “What To Consider When Choosing University Accomodation”